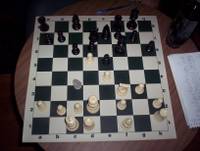 Black to move and win. This is the position I had after I played 10.g3?? at the tournament. Note the glass knight on c3...when i crossed over to Cerner in Kansas a couple of months ago, I brought my chess tube with me and it opened up during the ride (or crossing the border) and when i opened my suitcase all my pieces were all over...and i was missing a knight :( now that's the one i always sack in blitz ;)
Posted by Craig at 9:13 PM No comments:

Okay this was the second (and final) game of February 2006. Kirk had moved to Walkerton earlier in the month and his internet didn't get hooked up until Friday. I wanted to play two games this weekend but unfortunately I went into work at 2:30am on Friday night/Saturday morning so I was in no shape to play. 1.e4 This was to be expected 1...c5 I'm still not sure what my "main" 1.e4 weapon is. I got smucked horribly in blitz last night v. my own weapon (the Grand Prix) where I tried to castle queenside and he rebuffed that idea. Kirk had mentioned in the past that he does not have a good line v. the Kan, so in a "must-win" game (match tied, last game) I decided to play the Kan v. him 2.Nf3 e6 3.d4 cxd4 4.Nxd4 a6 5.Be3!? Of course I have not played the Kan for months and months so could not remember what to play v. this (if anything). I think the problem is that it leaves the e-pawn unprotected, so probably ...Nf6 was the best, but I just wanted to get into a comfortable situation where he couldn't really attack me with his usual Be2, f4, O-O line. e.g. get comfortable, get him out of his comfort zone 5...Nc6 [5...Nf6] 6.Bd3 Nge7 [Again 6...Nf6 probably was better here. Again, like so many times before, I had decided in my mind what I was going to play regardless (or irregardless) of what my opponent did (see any of my Caro-Kann Advances historically)] 7.0-0 Nxd4 8.Bxd4 Nc6 this is the idea. It wastes a tempo for White. A similar idea is possible when the bishop is *not* on e3, except I tempo the queen. 9.c3?! [9.Be3 is better;
9.Bc3 has also been played, trying to stay on the long diagonal, but i imagine his pieces would be falling over top of each other trying to get his knight developed] 9...Nxd4 10.cxd4 d5? [10...Qb6 wins a pawn, but I thought with symmetrical pawn structures (both open c-file) i had equality] 11.e5 [I think he wanted to avoid the isolated pawn after 11.exd5 Qxd5 but that may have been best. The advantage to his move is that he wants to limit the scope of my bishops. The disadvantage is that with the blocked center he can't take advantage of his advantage in development. ] 11...Be7 [Again Qb6 wins a pawn here again 11...Qb6] 12.Nd2 0-0 [I could've finally tried 12...Qb6 13.Nb3 but I figured I should probably castle eventually. Although I could've took my time with the blocked center. I think he should've took a little longer here and tried to get an attacking plan.] 13.Rc1 f5! I don't know if this was an exclam, but at this point, I'm thinking two things. One, get my pieces into play. Two, about the only threat he has is Bxh7+ so why not try and solve both. He chooses to give up Bxh7+ 14.f4 [I wonder if uniting his rooks with 14.Qe2 was any better. Rashid Ziatdinov must be rolling in his grave about our patzer development ;);
or even 14.Nf3 guarding his d-pawn] 14...Qa5! I was happy with this move, trying to get him to play a3, because his d-pawn and b-pawn are still hanging and without the a-pawn guarding b3, Nb3 is not so strong 15.a3? [Falling into my plan 15.Qc2 may have been better, doubling up on h7 after an eventual g4 and stopping 15...Qxa2?? because of 16.Ra1;
Another idea was 15.Bb1 which looks funny but may be good as it guards a2 and takes one piece off the d-file.] 15...Bd7 [Maybe I screwed up the move order 15...Qb6 16.Nb3 Bd7 was forced, whereas he didn' thave to play 16.Nb3 in this line] 16.Nb3 [16.Qe2 Qb6 17.Nf3;
or even 16.Nf3 may have been better. ] 16...Qb6 17.Kh1? [Maybe the immediate overprotection by 17.Rc3 was better, but my position is better here and i'm getting some material] 17...Ba4 18.Bc2 Rac8

Black to play and lose

I'm probably dropped below 1500 after this tournament. My main problem is that since I've beaten experts I expect to play at that level all the time, which just isn't true. I need to be more consistent, nothing more nothing less. 1-0
Posted by Craig at 5:20 PM No comments:

This is the first I've touched a chessboard (Tuesday) since the tournament (Saturday). It was a very unpleasant tournament for me and I'm not sure what caused it. Too much quickplay no doubt. I forgot to bring my clock that should have been a warning. I had decided beforehand to play 1.e4, the Alekhine and the Nimzo/QGD. I had White the first game

White to play and win

White to play and lose horribly

Why did I miss that the knight was defended only by the g-pawn? I wanted to play g3 while I could because I didn't want him to be able to pin. Kirk gave a more realistic excuse...not being used to playing with "real pieces". I had too much time to think, so I was making these deep knight inflitration ideas instead of looking at the board like I would in a blitz or active game. My opponent felt terrible and even apologized after the game.

So what's the solution? I want to play at the Canadian Open but I' m not real good at losing. Should I go back to playing things like the Caro? Should I give up chess? Should I analyze with a real board? I have given up correspondence. I'm thinking about just playing chess as a social activity, but I think I need a break. I may go to play more passive things as Black and just play 1.f4 as White and actually go through GM-RAM and endings books and sit at a board instead of this idiot box. We'll see 0-1
Posted by Craig at 6:43 PM No comments:

there were some good things to take from that. i won a pawn and had an excellent middlegame v. a relatively strong player. that is the level of player i will play in kitchener. the problem is that when he put a bit of pressure on me i crumbled. i need to focus more. Kirk, if you wouldn't mind doing a bit of analysis on this, i'd appreciate it ;)
Posted by Craig at 9:45 PM 1 comment:

yet another one bites the dust

i actually learned something from the last book...i feel stronger
Posted by Craig at 8:09 PM No comments: