How to play the English Opening (Karpov) 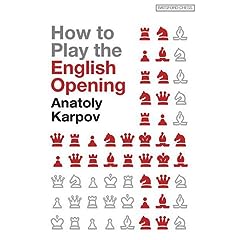 When we were in London a few months ago my lovely wife picked up this great book by Karpov for me. It is 30 games annotated by him, mostly on the King's English but also has a great section on the Hedgehog. The games are instructive, and many are quite spectacular. I have learned alot about the English and already some of the lessons learned in the games of the 12th World Champion (and others) have been used by me.

Here is one of the most spectacular

We were in Ottawa a couple of weeks ago and stopped at Chess and Math and picked up Fischer's 60 Memorable Games...the 2008 edition in algebraic and unadulterated :) I'm gonna fly through this one...i'm feeling my urge to play chess coming back, maybe I'll get a tournament in during the year 2009. Cross your fingers! I've been playing all sorts of things as White...I started the English because I felt that 1.g3 d5 was strong for Black :) As Black I'm mostly playing the Caro again, but I will be trying out the hedgehog v. the English and I've partially returned to the Nimzo. I suspect after playing over Fischer's games I will be playing the Najdorf and KID again :) We'll see
Posted by Craig at 11:06 PM No comments: