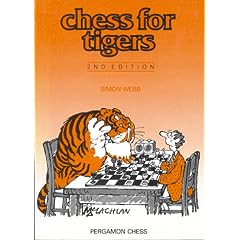 my buddy Chuck dropped that off a week ago and i hadn't read it for years, so i went and annotated all the games. Merry Christmas Chuck!

Not sure what my next book will be, my goal was to get this done by Christmas (we're leaving for xmas breakfast in about 20 minutes) in case a got a book for christmas i could start with no guilt ;)
Posted by Craig at 8:41 AM 1 comment:

i have finsihed going through my original Caro-Kann bible

I can't find a picture of it, i was going to scan it but K seems to be at school, so here's the game from the cover

Now the problem is selecting which book to work on now? I assume I will get one for Christmas...
Posted by Craig at 2:35 PM No comments:

Free Rating Points at the CFC

I gained 51 rating points for doing absolutely nothing! Well not quite nothing, i did play 51 games from the period between July 1, 2004 and September 6, 2006. According to one of the Governor's Letters

"There is news on the Ratings front as well. The Ratings committee has made a decision on an interim measure to combat recent deflation while a more permanent solution is worked on.

Based on tournament reports for all events which ended between July 1, 2004 and September 6, 2006, all players will receive points for games played as follows:

Ratings used will be as of the September 6, 2006. If a player crosses a threshold in the process, points will be applied above that threshold at the new rate"

some people ended up gaining as many as 200 points. i will have to go to kitchener in february and try and scoop some points now ;)
Posted by Craig at 6:35 AM No comments: