I just got back from the Owen Sound Winter Active. I scored 4½/5 securing first place...the opposition wasn't top notch, only gained approximately 20 points, but still. my only draw was v. kirk. here are the games.

the most annoying things to play against as black are the ruy lopez exchange and the slav exchange. i decided today i was gonna try 1.d4 c6 to try and avoid the tromp and stuff and maybe backdoor into a caro or two. i got it twice today and twice they played 2.c4 which was grand and then twice they played the slav exchange. man i hate playing it as black. same goes for the lopez exchange. and also the Fantasy variation of the Caro. shudder...
Posted by Craig at 8:33 PM No comments:

both of us really need to play better with black. the series is at 2½-2½ and white is scoring 4½-½ (the only blemish, my QID the first game)

This game wasn't really fair. It was supposed to start at 8 a.m. and Kirk basically slept in, woke up at 9 and started making coffee and stuff. My plan was to slowly build up a position rather than do the usual 20-30 game finish that happens in our games. God forbid me and Kirk ever get an endgame! 1.d4 e6 I had a bad premonition of him going into a Slav and me having to decide whether to play the Slav Exchange or go into the Botwinnik. 2.c4 Nf6 3.Nc3 Bb4 4.f3 I'm gonna keep on playing this until he finds an antidote. 4...d5 [I seriously thought he was going to benoni me 4...c5. After the game he said that he didn't even remember the line and thought that he beat me last time I played 4.f3 ] 5.a3 Bxc3+ 6.bxc3 c5 7.cxd5 exd5 White has to be better here on general principles alone. He has traded his b-pawn for White's glorious e-pawn and has the bishop pair. In annotating the game Junge-Bogoljubov, Alekhine gave this move an exclam and thought Black was better after 8.e3 Bf5! [7...Nxd5 is the main main line. 8.dxc5 (but I likely would've went for 8.c4 and gotten on with it) 8...Qa5 and this is butt ugly] 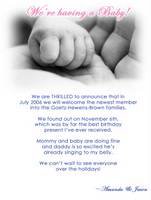 Oh my God I'm so happy for them. Amanda sent me an email today. I tried to get them to call the baby "Craig" if it's a boy but she wasn't so sure. that's fabulous, happy news.
Posted by Craig at 12:00 PM No comments:

i rented it and it's really cool

also i was thinking about taking up the Owen's Defense for the next tournament, seeing i live in owen sound and all, but considering i can't justify playing 1.b3 i can't see how 1.e4 b6 is playable ;)
Posted by Craig at 8:48 AM No comments:

Week four. Who thought we'd get this far? I really hadn't put much thought into prepping for this game. 1.e4 c5 I didn't decide what I was going to play until I walked and picked up a coffee before the game. Kirk has a pretty tight repetoire and normally plays a Be2/Be3/f4 system v. the Sicilian. With the Taimanov, ...b5, ...Bb7 I can take advantage of that. Better than getting into a relatively theoretical duel in the Dragon where he obviously would be more comfortable. 2.Nf3 e6 3.d4 cxd4 4.Nxd4 a6 5.Be3 [This was unexpected. I figured on something like 5.Nc3 Qc7 6.Be3 Nf6 7.Be2 b5 and a decent position. Now I was left to my own devices] 5...Nc6 [Theory says that 5...Nf6 is better, putting the question to the e-pawn.] 6.c4!

I learned a couple of things from this game

1) i'm lazy tactically...i totally trusted kirk and didn't try and look for anything, especially in the early middlegame/opening
2) i didn't look hard enough at his threats
3) i had one idea (...d4, ...e5) and assumed it was fabulous and didn't look at anything else

so i went to http://www.chesslive.de and entered my name and low and behold they had games for me. from all over the place. this is my first email game i won back in 1999